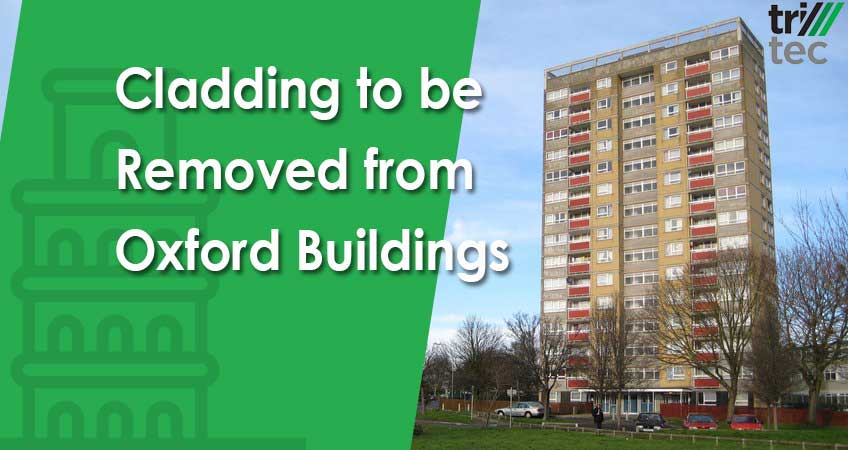 Cladding to be Removed from Oxford Buildings

Before tall and sophisticated skyscrapers came around, we had regular buildings and towers like the Hockmore Tower in Oxford. Cladding panels, which are used to provide weather resistance and thermal insulation in homes, was placed on this and a few other towers in Oxford. However, within a few years, people began questioning if the retro-fitted cladding was that safe.

Incidents that instigated the decision to remove the cladding

The initiative to remove the cladding from a residential block in Oxford was prompted by the fire outbreak in Grenfell Tower in 2017. In the history of the UK, this incident was the deadliest structural fire, killing 72 people in all. A malfunctioning fridge-freezer started it, but the fire spread quickly because of the building’s cladding.

A second incident that influenced the decision to remove the cladding on this Oxford Building was the Lakanal House Fire incident of 2009. In this tragic event, six people were killed. Again, the fire was spread quickly by the high-pressure laminate (HPL) rain screen that covered the tower. Coincidentally, this is the same building cladding that covers the Hockmore Tower in Oxford.

In mid-June, reports revealed that HPL burned 115 times hotter than most normal household items, which was a major concern for the government.

On the 1st of July, the UK government said that the HPL rain screens on the Oxford tower blocks needed to be removed as they were used with combustible insulation. The incident that fully convinced the government to take this decision was when an HPL screen failed a private fire test.

Mike Rowley, the Oxford Councillor added that the council was acting swiftly to replace the cladding on the tower, and the project will cost north of £1m.

What is being used to replace HPL rain screens on the Oxford Building?

The most viable alternative that the council could use to replace the HPL screens on the Oxford Building was aluminium composite (ACM) rain screens. This didn’t go down well with a lot of people because it was the same type of cladding that contributed to the Grenfell Tower and Lakanal House fires.

However, the Hockmore Tower is quite different from the other towers where tragic incidents had occurred. The Oxford Building has a sprinkler system in its flats, an evacuation policy and fire breaks in its cladding system. This comprehensive range of safety measures is unlike what was in the Grenfell and Lakanal towers, where a stay-put policy was used.

The cladding panels of a total of five towers in Oxford need to be replaced. The Windrush and Evenlode Towers are made from less than 10% of the exterior façade, while the HPL rain screen makes up 40% of the façade in the Hockmore Tower.

What is the safest cladding option to use on a tower or building?

The three things to look out for when searching for a cladding to use are the required maintenance, aesthetics and safety of the cladding. Stone, brick, UPVC, timber and metal cladding may be difficult to grade on these criteria. However, one thing is certain; Tritec’s roofing claddings are the safest.

If you need a long-lasting cladding option, then Tritec’s is your best bet. You will definitely not experience any accident with us.

How far has the project progressed?

The council in Oxford is seeking to reclaim most of the cost it would expend in replacing the cladding of the building from the government. Since the decision to replace the cladding was made, it has received £1.2m for the project in Windrush and Evenlode tower blocks. These two towers also have HPL screens. The removal of the high-pressure laminate cladding from the most impacted block (Hockmore Tower) is expected to be completed in the first quarter of 2020.

Simon Furlong, the Chief Fire Officer, confirmed that the building is safe to live in, even while work is being done on it.

The replacement project for all towers is expected to cost about £1.5m. Some work will also take place in the Plowman and Foresters tower, but total removal of their cladding is not required.

Councillor Rowley Mike, the representative for affordable housing, said: ‘We will not compromise on safety. We have gone above and beyond legal requirements at every stage to ensure an enhanced level of fire safety for the families living in our five tower blocks. We are acting quickly to remove and replace the cladding.’

Replacement of a building’s cladding is a delicate matter that requires a swift response. To prevent the disasters of 2009 and 2017, residents must not only leave the duty to the firefighters alone. They must make sure that things are in order, and the cladding panels used are as efficient as they should be.